Telepresence Conferences with ETs & Celestial Guides. There are 70 trance sessions in the first five books of the series.  Visit Ted’s author page

The first volume of this five volume series, The Star Table Trance Missions, opens with a running account of the pivotal meeting of Julie and Ted (J&T) in southwest Colorado after he writes to acknowledge her astrology columns in Atlantis Rising magazine (they are both semi-professional astrologers), and quickly continues on to become a dovetail match for their partnering through the hypnotic mind field of discovering how and why they are both first-generation Pleiadian hybrids who are destined to come together again—after many lives knowing each other but often spent apart for various reasons … in this solar system and others—which is all richly presented in visually-stylized hour-long verbal enactments by an amazing variety of ET participants: ET family (they both have Pleiadian ET fathers), friends and their consultants, including Pleiadian star-woman Semjase and Earth-based esoteric teachers Hilarion and Athena.

Initially, of course, they are “blown away” but remain cautiously persistent with their candid reactions of amazement, but they slowly get used to the highly persuasive narrative that is being uncovered and presented step-by-step, giving them time to get used to the revelations that are so cleverly unwrapped.  This is exo-psychology at its edgy best with adventurous narrative twists that will easily out-do nearly any concocted sci-fi fantasy—and which is authentically real if you can believe it or just a great story if you can’t—but J&T slowly realize that it is probably a tale for future generations rather than the skeptical or titillated mass audiences of fractured present-day Century 21, but they also realize that the UFO/ET enigma is the greatest story of their era.

Volume 2, Star Family Excursions, steps the adventure up into the series’ main investigative theme: the origins of Earthumans from five “nearby” principal star systems—these are the “Five Stars”—beginning in most recent times with Aldebaran and various star systems in the Pleiades, the diaspora from the ancient Sirian super nova, the entreaties of the highly-advanced Arcturian overseers, the Andromedan witnesses and instigators of much European civilization and finally the truly ancient cosmonauts from Cygnus-Lyra, the earliest origin of human survivors (so far) like ourselves on our very ancient and mostly always troubled Earth, the only remaining planetary refuge of advanced intelligent life in our solar system.  J&T’s mostly white animal entourage of a bear, a tiger, an occasional dolphin and two raptors (and later Tygon, a great white wolf), showing inter-life-kingdom continuity, is also instructive—and often quite charming and amusing.

In the third volume, Star World Ascension, the main theme detours into the mythic archetypal belief or feeling that we are indeed currently living in a very special time of “Ascension” that has been channeled, discussed and hyped under numerous headings and subtexts such as “Biblical end times,”  2012 Mayan calendar expectations, runaway climate catastrophe, political false-flag scenarios, etc.  The debunked interpretation presented by “our ETs” is that this new high-stakes time of reckoning is still the same old game of individuated human evolution lurching towards greater awareness but is currently being accelerated by the culmination of Astraea, the stellar brown dwarf companion star of our main solar system, now having reached its perigee with our sun in late 2011, opening a new Cycle of the Ages (the reason for the Precession of the Equinoxes!) … and it’s a threshold that will eventually … someday … nobody knows when … lead into a new golden age of democracy.

By the time of Volume 4, Star Time Convergence, evidence has accumulated sufficiently for the bonding between J&T and their ET handlers to have reached a plateau of understanding and involvement so that the roles of the former as cosmic ambassadors has coalesced to a point that the pair is able to meet with the ‘Terran Council of Truth and Light’ and some of the higher counselors, known to us in some of our ancient traditions as Gods and Goddesses, or “Angels” and “Archangels,” are sufficiently interested to make appearances of acknowledgement and encouragement.  Much along the way has been discussed and expanded, regarding scientific understanding and successful spiritual striving among planetary civilizations that a greater synthesis emerges for all to see who have followed these journeys out of physical body and out of conventional mind.  We can see that no one, not even the benevolent ETs, as amazing and advanced as they are with their unbelievably sophisticated, technologies and modest demeanors … can really predict the future because it depends on what everyone will actually do and what will result from it, as we go forward into our common cosmic future in the local galactic neighborhood with these exotic denizens—but it is clear they are going to be making a superhuman effort to secure the Earth from destruction, as eventuated with all other planetary human habitats in our solar system in the most ancient of times.

Upon arrival at Volume 5, Star Light Reflections, the concluding “esoteric dozen” (the final 14 chapters for a total of 5 x 14 = 70), the *Five Star Series* will soon be complete upon its imminent publication (April, 2021).  By now all the superlatives have been used and re-used in an attempt to describe the many unexpected appearances and amazing revelations of the many—perhaps a hundred in all—exotic ET guests and Celestial beings who have appeared—not to mention Rhi and Phindar, J&Ts closest future selves from the planet Erra in the Taygeta Star System, or Ariel and Michael, their most exalted future selves from the Arcturus System … or indeed, their dearest friends, Hilarion and Athena, who remain tireless and exalted in their continuing somewhat mysterious presence, and lovely Semjase, who continues to monitor the sessions but has dropped back into more of a background presence because, as always, she is very busy (and probably has a new love in her life) but continues to be healthy after a terrible injury logged earlier in her role as a liaison in the Earth saga with would-be, but reluctant, New Age Prophet, Eduard Billy Meier.  Her father, Ptaah, the commander of Alliance, the Pleiadian Great Spacer Starship, has also put in numerous appearances with her and remains “on the holodeck” as one of Earth’s great protectors.  The Star-Trek connection is also explained along the way.

This sequenced anthology, whose events began in 2010 and continues up to 2015, is now only available in ebook form but will eventually appear as print books (so much work!).  It enfolds a story with a lot of questions and answers and has been a beautiful adventure, but like all good things, must and did come to a memorable ending with the celebratory serving of fruit juices at the last table session for all participants in the final session 70.  But hark … a new series of five more books that continues up to the present (2021), entitled *Star Journeys* (subtitle: Close Encounters of the Sixth Kind), is already well into production with the transcripts of the fourth volume complete (!).  And there is still so much more to discover and describe as we get past the terrible Covid crisis (about which you will find more than will ever appear in any news report).

Julie and Ted have learned so much and been exposed to such a succession of amazingly advanced beings, as we learn, who are mostly humanoid—as are about three-quarters of all ETs at large in our galaxy (there are a few appearances by exotic non-humanoid beings such as Grays and Mantids, too).  J&T have been humble and grateful in their amazement and also showing signs of making some notable advancement themselves (such as increasing experiences of mutual telepathy), which story they hope they can successfully continue to share with those of sufficient interest, knowledge and awareness, that it will become a natural mode of instruction for understanding our unique position of opening into a “higher and deeper” future Space-Time home world.  This rather extraordinary narrative was the way our new century began for a couple of very unusual people who met and merged the final stage of their lives and retirement careers together as writers, thus far, at the two ends of our enchanted American Southwest, stretching between Colorado and California … and between our extended Solar System and the truly big cosmos … out there … in every direction. 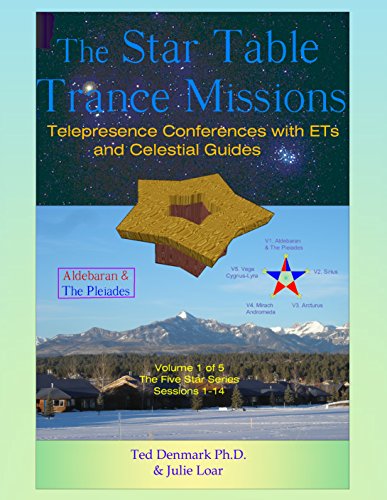 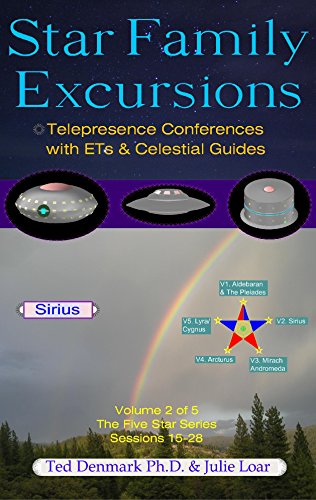