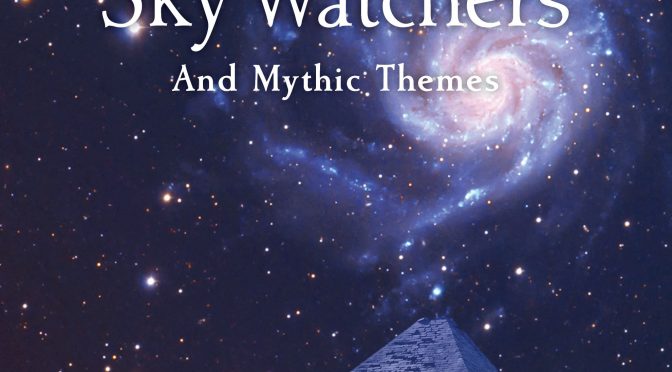 (Huge thanks to Ted for this amazing review of Volume One in the Sky Lore Anthology series. It’s a thrill to hold two decades of work in my hands. If you’re tempted, there’s purchasing info for both volumes at the end of his review. Thanks in advance!)

If you were ever a reader of Atlantis Rising magazine over the course of its impressive twenty-year flight, you will likely have seen, and been drawn to read, some of Julie Loar’s regularly-featured and highly-polished astrology articles upon first publication.  The recent good news is that they have just become even more accessible together in this self-published retrospective anthology collection—without having to wait to catch the next one on the fly—in the wake of her extensive interest in and wide-ranging knowledge of this fascinating and always controversial subject, whether ancient mythic, modern discursive, or cutting-edge technical (!).

The subject of astrology stimulates a lot of creative writing in our time as it has for many centuries, having been the commonality and primary core subject, as C.G. Jung noted, of many if not most traditional wisdom traditions leading up to and including his own most impressive additions to modern psychology, as the mix and clash among religious, scientific and pop variants still contend for mind and shelf space.  Of course there is a lot of student-level enthusiasm as well as some amount of backsliding in all this robust output of writing—not to mention the entertainment genre—so something has to be good to maintain its position on the front lines of conversation at the astrology brew pub.  Julie’s selection of forty articles in five major categories of her highly varied and successful previous outings, virtually as they first appeared, are still highly topical, in this first, Ancient Sky Watchers volume, and they do indeed rise to a high level of interest and accessible value, being well worth the read—one at a time before and after tea or in binge mode—especially if you are looking for a fresh,  comprehensive and well-researched take on this perennial subject, either as student, professional consultant, critic, or occasional curious onlooker.

It is a real treat to find an author in this fascinating subject area so simultaneously knowledgeable, sophisticated and articulate about the prehistoric mythic traditions of Egypt and Sumer vis-a-vis those of  ancient Greece and Rome, the approaches and strategies of an experienced modern astrological consultant, and the more recent discoveries in space science from ground-based telescopes and satellite instrumentation—all referencing the impact or influence on our lives of many kinds of very real celestial objects now known and understood in greater detail than ever before.  It’s not easy to provide an entry into the basics of celestial mechanics, whether for students of qualitative astrological interpretation or quantitative scientific rigor, but Julie goes to some length to make this subject approachable with her writing and teaching skills for either group.  Being able to visualize (and understand!) the varied daily motions of Earth, Moon, and Planets, not to mention the longer-term cycles of eclipses, comets and the grand Precession of the Equinoxes, is the point of entry into the cosmic sky-watcher game (beyond just looking, which is cool enough), and if you have not bothered to look up at the sky—urban dwellers in night-lighted areas are most disadvantaged—then this is a place to begin to get your bearings.

Like Julie, I have been a lifelong sky-watcher as both astrologer and amateur astronomer (and unlike her, a design engineer of space-satellite instruments), and I have to admit that I have learned an enormous amount from the original publication on her articles over the years before meeting her in person a decade or so ago.  As an astrologer, I was most lacking in knowledge of the mythic and historical origins of ancient astrology, and in that, she is probably as good as anyone now in print, to help us understand the viewpoint and philosophy of the ancient interpreters of this universal cosmic art-science or pre-scientific art that has been continuously available to all people of all cultures virtually for all time—in fact it is probably the most universally shared common human experience ever on our little ”blue dot” (to echo Carl Sagan) of a water planet in the outer reaches of the Orion Arm of the ever-so-glorious Milky Way Galaxy.  Julie ranges through many familiar subjects on the astrology agenda, often with a tip of the hat to Joseph Campbell and a few other luminaries, to making strikingly original observations about ‘sky paintings’ on the cave planetarium walls near Lascaux in France (‘animals of the hunt’ as a very early “Zodiac” with the Pleiades depicted) to the Dendara Zodiac in Egypt (symbol for Zodiac sign Cancer correctly interpreted and understood, possibly for the first time).

If we ever wondered what was going on with the mytho-poetic stories of the legendary gods and goddesses in the ancient Mediterranean world, many of whom are now up in the constellational sky, go no further than any number of sophisticated recapitulations and explanations along the way of the Titans and Olympians who, then as now, populate our astrology archetypes.  Julie presents the pantheon with sympathy and insight—and scholarship.  One can spend a great deal of time spinning through various re-tellings of these yarns without much accumulated insight, as I did, before focusing on Julie’s understanding, among other things, of the category of the feeling for “the Sacred” in the ancient world.  In a sense these poetic stories were the religions as well as the ‘movies’ of those times and, though varied and ever-changing, they had a similar cultural place understood by the natives, just as their story-board correspondences are understood by us today.  The truth is that the people of these earlier times, though certainly less educated and knowledgeable scientifically, were mostly just as smart and passionate within their range as modern people, however much our somewhat condescending idea of “progress” may be in need of remedy.  Of course times were very different then—the very thing astrology helps up to understand in the most meaningful way!  If you have not yet been initiated into the grand scheme of the Platonic Year, this is the place to perk up to a more than merely fascinating historical hypothesis.

In the middle span of her territory Julie, as a very well experienced consulting astrologer, fills in all the blanks that many readers will be looking for in the always telling areas of personal interest with “cook-book lists” of astrology planets, signs and aspects, the working tools of the trade in astrology chart art, which will tell you, from time to time, about wherever you might begin to fit into various developmental sequences, as a Sun in Aries, Moon in Pisces, cuspal ascendant and the standard stops in between.  Her approach in such thematic articles adds immeasurably to the flat newspaper entertainment style (which, sadly, is all many people will ever know about astrology), and brings it all back home with insights only an experienced and conceptually sophisticated analyst can succeed with in a brief offering.  It’s not a substitute for an in-depth ‘reading’, but her itinerary is always thought-provoking and often spot-on. She’s been a guide on many Egyptian tours, too, and has specialist knowledge in this area of ancient sky watcher lore for mainline Graeco-Roman astrologers who came in at the intermission of the astrology movie.

Perhaps the most intriguing and possibly surprising aspect (there’s a timeless astrology term) of Julie’s presentation is her enthusiasm and detailed knowledge of state-of-the-art scientific discoveries in more modern astronomy and astrophysics (more interpretative scholarship).  The impact they will have on the meaning and development of astrology for astrologers (note: we are not astrologists but hope you get the gist of astrology ) in the future will doubtless be great—even revolutionary—as it attempts to assimilate the existence of various big moons, little asteroids, dwarf planets, the rocky Kuiper Belt, the icy Oort Cloud and the mysterious—and quite likely astounding—discovery of either a huge new planet termed, “Planet Nine” (was that where John Lennon was from?), orbiting in the far reaches of the outer solar system, or as Nemesis, a small companion proto-star in an extreme orbit nearby our solar system.  This is the modest tip of the iceberg of Julie’s more ambitious project of revisioning astrology, now going forward as we may look back at her musings over the course of the astersand disasters of our still new Century 21.  Julie Loar is a star in her own right who knows about the real stars way out there—the real subject of astrology that, sadly, has been lost behind much of the yet most valuable modern planetary astrology (a very complex subject in its own right  in any event) … and much, much more.

This is how Volume One of Julie Loar’s “Sky Lore Anthology,” Ancient Sky Watchers, ends—in an exciting rush into anticipation of future science breakthroughs … and of course, the meaning of them to be discerned by and for those of us who know … it ain’t all random grains of sand on the beach, folks.  If you are one of us, you will not be disappointed, and if you are a sceptic, you will learn a lot that will make you very thoughtful.  This is a major publication event in the astro-theme world … with Volume Two (As Above, So Below) also available now … and also to be acknowledged in review ASAP.

Click the first link below to buy Volume One on Amazon in print or ebook. It’s also available from Barnes and Noble, Apple Books, or Kobo.

Volume Two, As Above, So Below: Sun, Moon and Stars is also available. This is the Amazon link.