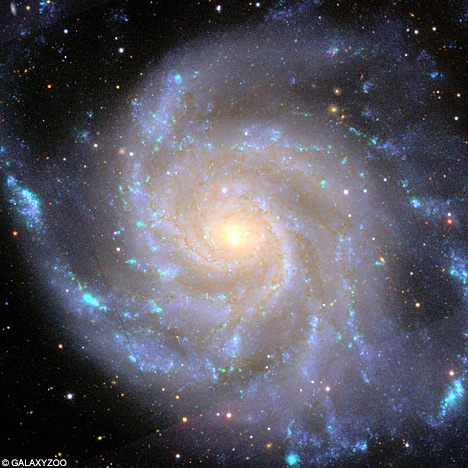 “Venus draws a pentagram around the Earth every eight years. The Moon squares the circle. Everything in the heavens moves around everything else, dancing to the Music of the Spheres.”

Musica Universalis, or the “Music of the Spheres,” is an ancient philosophical concept that sees the proportions of the movements of celestial bodies–Sun, Moon and planets–as a form of musica, the Medieval Latin name for music. This music is not audible but is understood as a mathematical concept. The Greek philosopher Pythagoras is usually credited with this idea, which stemmed from his mystical and mathematical philosophy and its associated system of numerology. The discovery of the geometric relationship between mathematics and music within the Classical Period is also attributed to him. Pythagoreans believed this relationship gave music powers of healing as it could “harmonize” the out-of-balance body.

There is a legend that Pythagoras could hear the Music of the Spheres, enabling him to discover that consonant musical intervals can be expressed in simple ratios of small integers. In an effort to win their confidence, Pythagoras told Egyptian priests that the god Thoth gave him the ability to hear this “music.” He believed that only Egyptians of the right bloodline, passing successful initiations, could enter the temples and learn the mysteries set in place by divine beings at the beginning of time. Plato and others transferred Pythagoras’ concepts into structural models of the universe assigning the Platonic solids to the planets and alchemical elements: Earth-tetrahedron, Water-cube, Air-Octahedron, Fire-dodecahedron, and Quintessence-icosahedron. The spheres were thought to relate to whole-number ratios of pure musical intervals, creating harmonies.

Johannes Kepler used this concept in his Harmonice Mundi, the Harmony of the Worlds, in 1619. Kepler was convinced “that geometrical things have provided the Creator with the model for decorating the whole world.” He attempted to explain the proportions of the natural world, particularly astronomical and astrological aspects, in terms of music. The central set of “harmonies” was the musica universalis. Kepler noticed that the ratios between planets’ extreme angular velocities were all harmonic intervals, and he attempted to precisely calculate these “world harmonies.” He said, “The heavenly motions…are nothing but a continuous song for several voices, perceived not by the ear but by the intellect, a figured music, which sets landmarks in the immeasurable flow of time.”

Pythagoras identified that the pitch of a musical note is in proportion to the length of the string that produces it, and that intervals between harmonious sound frequencies form numerical ratios. Later, Plato said astronomy and music were twin studies of sensual recognition—astronomy for the eyes and music for the ears—both requiring knowledge of numerical proportions. In antiquity the seven notes of the octave, in which the eighth note is a doubling of the vibration of the first, were assigned to the seven visible and moving heavenly bodies:  Moon, A, Mercury, G, Venus, F, Sun E, Mars, D, Jupiter “Middle C”, and Saturn B. There are five black notes on the piano keyboard between middle C and the C above it. If we add those pitches, the sharps and flats, to the seven white notes already mentioned, we have twelve pitches (the Chromatic scale) that are the same as the number of signs in the zodiac, showing the relationship between the two systems.

One axiom upon which the Hermetic principles of astrology are based comes from The Kybalion.  This is the Law of Vibration, which says,  “Nothing rests; everything moves; everything vibrates.” Hermetic teachings state that not only is all matter vibrating, but our emotions are also a manifestation of vibration. Therefore, emotions and desires are accompanied by vibratory rates, which may be lowered or raised at will by adepts.

Modern science suggests that ordinary people can accomplish the same thing. According to research by University of Missouri scientists published in The Journal of Positive Psychology, people can successfully improve their moods and boost their overall happiness in just two weeks, simply by listening with intention to specific mood-boosting music. Researchers at McGill University in Montreal say the response to music comes from the chemical dopamine. When we listen to a rhythm, our heartbeat actually synchs with it. A slow heartbeat with a strong diastolic pressure tells our brain that something sad or depressing is occurring. Fast beating is related to excitement, and a dreamy rhythm with occasional upbeats can signify love or joy. Hitler used martial music to stir aggression. Churches use hymns to inspire and comfort, while rock music energizes and activates people in various ways. It’s likely that types of music correspond to planets and signs; marches to Mars and Aries, waltzes to Venus and Libra, for example.

Tones are equally as important as rhythm. A major key sends a cheerful communication to the brain, while minor keys mirror sadness. Research shows that this has a powerful effect on the brain, directing our psyches to resonate with the type of music and to actually feel what’s being communicated, thereby altering our emotional state.

As for the planets, Mercury is gravitationally locked and rotates in a way that is unique in the Solar System. Astronomers once thought Mercury always kept the same side towards the Sun, like the Moon, meaning one rotation on its axis was the same as its orbital period, but this is not true. As seen relative to the fixed stars, Mercury rotates on its axis exactly three times for every two revolutions around the Sun. As seen from the Sun, in a frame of reference that rotates with the orbital motion, Mercury appears to rotate only once every two Mercurian years–a 2:1 ratio.

There is also an inherent geometry between Mercury and Venus, the first and second planets from the Sun. If the three points of Mercury’s “sunrise” noted above are plotted on a circle they form an equilateral triangle. If circles are drawn around the center points that are large enough to touch each other’s circumferences, the orbit of Venus exactly encloses the three circles.

In Atlantis Rising #69 I wrote about the amazing geometry of Venus’s orbit. From Earth’s point of view Venus traces a perfect five-pointed star over a period of eight years. Each time Earth and Venus “kiss,” at the time of Venus’s inferior conjunction, or when Venus is in alignment with the Sun and closest to Earth, one point of the star is formed. The conjunctions of Jupiter and Saturn form an equilateral triangle every twenty years. The oppositions likewise form another equilateral triangle, so a six-pointed star is formed over a period of about 120 years. The orbits of all the planets have amazing geometric relationships in an exquisite synchrony of celestial mechanics.

Ernst Chladni was a German physicist and musician. Chladni’s technique, first published in 1787 in his book, Discoveries in the Theory of Sound, consisted of drawing a bow over a piece of metal whose surface was lightly covered with sand. The plate was bowed until it reached resonance, and the sand formed a pattern showing the nodal regions. The results became known as Chladni Figures.

Two centuries later, Hans Jenny, a Swiss doctor, artist, and researcher, published the bilingual book, The Structure and Dynamics of Waves and Vibrations. Jenny, like Chladni, showed what happens when materials like sand, spores, iron filings, water, and viscous substances are placed on vibrating metal plates and membranes. Shapes and patterns appear that vary from nearly perfectly ordered and stationary to those that are turbulent, organic, and in constant motion. Jenny called this new area of research Cymatics, from the Greek kyma, which means wave. The mystery of “solid matter” appears to be contained in sound and vibration.

A modern composer, Greg Fox, wrote Carmen of the Spheres, a composition that attempted to literally “hear” the planets as they orbit the Sun. His approach was to halve the planetary orbital period until he found the “pitch” of a planet orbiting the Sun. He created his music by raising that pitch 36 to 40 octaves.

Jim Bumgardner, a Los Angeles software engineer specializing in visualizations, created The Wheel Of Stars, a visualizer that utilizes data from the Hipparcos mission. Hipparcos was a satellite launched by the European Space Agency in 1989 that accurately measured over a hundred thousand stars. Bumgardner downloaded data that contains position, parallax, magnitude, and color information, among other things. The program puts the stars to an ethereal music of their own making, creating something magical.

A number of active spacecraft, including the “planet hunter” Kepler Space Telescope, use asteroseismology, which is the science that studies the internal structure of pulsating stars by interpreting their frequency spectra. Different oscillation modes penetrate to different depths inside the star. This technique turns tiny variations in stars’ light into sounds, measuring minuscule variations in a star’s brightness that occurs as sound waves bounce inside the star. Using resonances, a picture is created of what the inside of a star looks like. The Kepler studied thousands of stars in its field in this manner.

In A Little Book Of Coincidence John Martineau says, “The planets have long been suspected of hiding secret relationships. In antiquity students of such things pondered the Music of the Spheres, the heavenly bodies singing their subtle and perfect harmonies to the adept.” Martineau asks if it is all just a coincidence? If not, what are we to make of these exquisite harmonies and geometric proportions?

In 1968, Russian scientist A.M. Molchanov’s research for the Institute of Applied Mathematics in Moscow resulted in a paper where he argued that the entire Solar System is a tuned quantum resonant structure, with Jupiter, largest of the planets, as the orchestra conductor. He wrote, “oscillating systems that have attained evolutionary maturity are inevitably resonant, and their structure is given by sets of integers, just as in quantum systems.” He also remarked “Even if every one of the billions of stars in our galaxy had a planetary system, it would not be able by chance to produce even one resonant system such as our Solar System.”

Plato said, “God ever geometrizes,” and like mathematics, music was discovered, not invented. It does seem as though harmony and proportion are the foundation of Creation. Music can be simple or complex, ranging from a solo voice to a symphony orchestra. Melody involves the consecutive playing or singing of notes, while harmony involves the simultaneous playing of notes like in a chord or multi-part singing. Duration, which is the length of time a note is played or sung, creates rhythm, or “beats” per measure. Different instruments playing different rhythms can create a multi-faceted musical experience. This might be compared to the durations of the planets’ orbits as well as their differing axial rotation periods, which through their mathematical relationships does create a sort of symphony that the ancients perceived and we are beginning to measure.

If the planets geometric relationships and resonances create, or result in, vibrations or frequencies, an astrologer who is equipped with knowledge of planetary harmonics, could identify what was “out of tune,” or imbalanced, in a birth chart. The ancient art of musical healing might then be used to harmonize the vibrations. What might the implications be for harmonizing the energies of an individual or even the Earth itself?